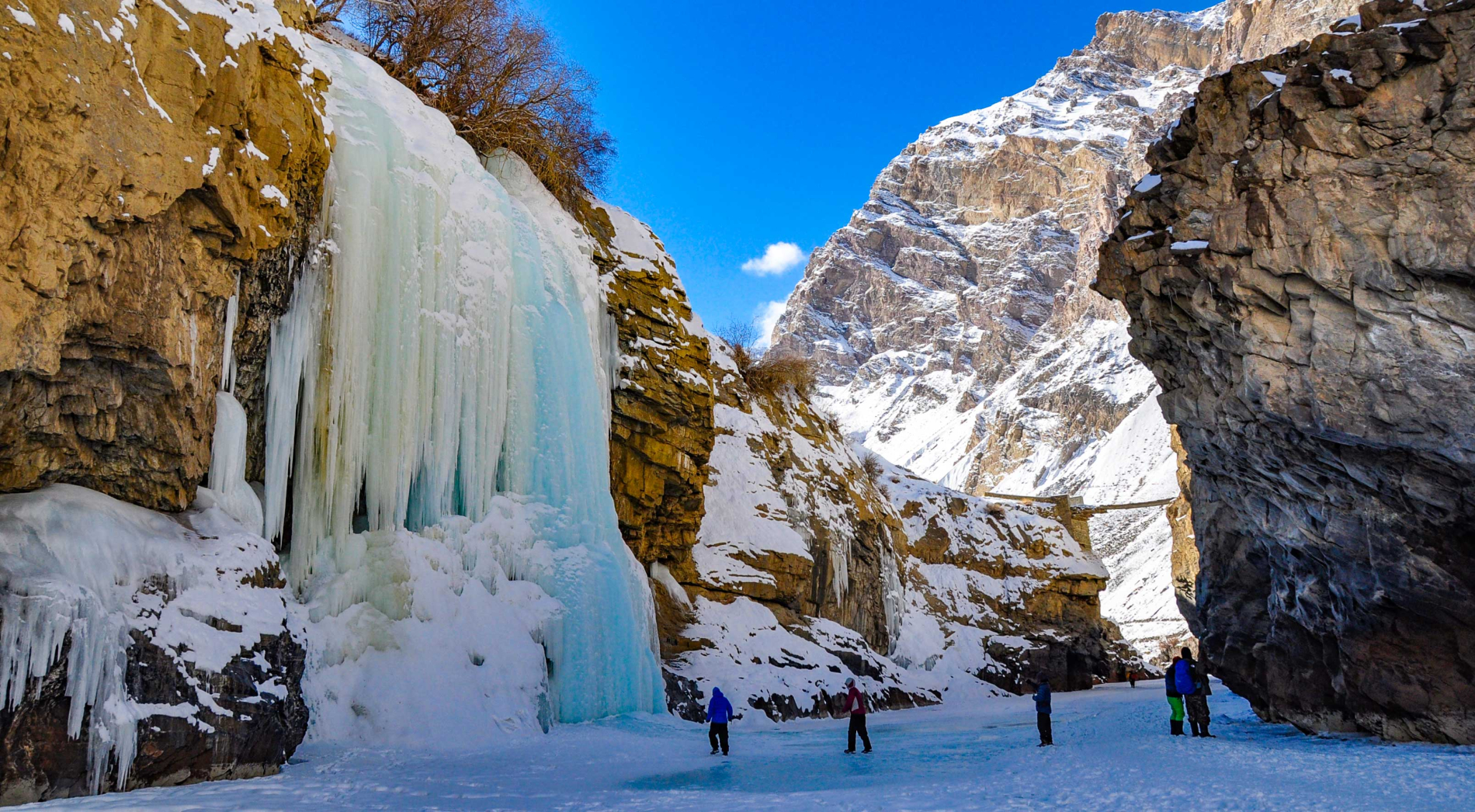 Chadar Trek: Into The Frozen Valley Of Zanskar

I guess it all began when I got to know about the mighty ‘Chadar trek’ in the Himalayan ranges from an acquaintance. The urge to go on the Chadar trek instigated further when I watched a couple of documentaries about it. The thought of going to the Chadar trek kept on lingering until I finally got a chance in 2017. I asked a couple of friends, but no one was interested in walking on ice for 7-8 long days. Thus, I booked the Chadar trek alone with one of the agencies. Immediately after the booking, I started looking for flights to Leh. It came to my knowledge that flying to Leh in that season was pretty unpredictable, owing to bad weather and heavy snowfall, but there was no way around. It was as if the whole aircraft was entering a snow-capped wonderland. Huge valleys were white-washed with snow and frozen rivers cutting through them. As we landed at the Kushok Bakula Rimpoche Airport at Leh, there began our journey in the cold desert of the Ladakh valley.

I found five crazy people like myself at the Delhi airport, and we were together for the rest of our trip. I had one good day to acclimatise to the Leh chills, but we were not the ones who like to stay at peace. Luckily none of us had any problems. As a part of acclimatization, we went out to get familiar with Leh. We started with our first stop at Shanti Stupa, where got to view one of the magnanimous Buddha statue and endless Himalayan ranges. Our second stop was Leh palace which was the home of the King of Leh for many years. As our journey continued we visited Sha palace, The famous Rancho’s school from the movie 3 idiots, and Thikse Monastery. End of the day the excitement was still at its heights as we were to start for the Chadar trek the next day.

On a Sunday morning, a Tavera came and picked 6 of us from Leh and transported us to the starting point of our trek called Shingra Koma. We were not dropped at the Tilat Sumdo as the Chadar formation had not taken place till Shigra Coma. There began our much-awaited journey on the Chadar- the frozen Zanskar river. It took us a good 5 hours from Leh to reach the location amidst the beautiful and mighty Himalayan valley. We took a break at the Pathar Sahab Gurudwara and had our tummies filled with the delicious langar. Then came the famous magnetic hill and finally Nimoo, the village that marks the confluence of the Zanskar and Indus (Sangam). Crossing Nimoo we reached the Shingra Koma passing Chilling in between the way. The porters and the guides started setting up the camp, and all of us had the first chance to step on the Chadar and get familiar with our home for the next week.

We took small walks around the campsite and were excited to see different forms of Chadar. And the huge rocky mountains around added a feel of an isolated place in the coldest desert valley. One of my friends dared to take some shots in the night when the temperature reading in the thermometer showed -20 C. It was a beautiful night with a gorgeous sight of the milky way right above our tents and some of us started spotting constellations in the night sky with sheer joy. I went back into our tent and slowly slipped into my two good sleeping bags provided to protect ourselves from dying cold.

This day our trek started for Sumo. We had to trek almost 8 km on this day and at places, we had to manage ourselves crawling below the narrow cliffs where chadar was formed only on the real corners of Zanskar. This surely was one of the beautiful days during our trek where we could experience and learn about chadar better. We were better off walking on the slippery surface as well. There were a couple of frozen waterfalls along the way which was altogether a different feeling to see such waterfalls for the first time. It felt as if we were walking in a snow desert.

Once we reached the campsite we got a chance to rest aside the semi-frozen Zanskar. It was the windiest area between the valley so far. We tagged our tents and in a couple of minutes started looking for wood in the nearby area as we wanted to have a campfire tonight. The view was mesmerizing, the night was dark and there was an unexplainable joy in the heart. We sang songs, danced, cracked jokes, and finally had a good sleep.

When we woke up in the morning, we were delighted to experience snowfall. It was like a dream come true for many of us as we were wishing to see the snowfall. It was not just beautiful, it also made our trek on Chadar very easy. When I came out of my tent, it was a beautiful sight to see the white cover everywhere. We started for Tibb and in our way, we saw a lot of frozen waterfalls. We got so much to see on this patch. After 5-6 hours of walk, we reached Tibb (Tibb in ladhaki means Shade). It was snowing all the way. The whole way was covered with snow. All the desires to play with the snow could be fulfilled once we reached Tibb. We danced in snow, Snow fights and also the best part was to create a snowman. But all this time we didn’t think about what was next for us. Time for the reality check, because of the continuous snowfall the temperature starts rising for Chadar, and the formation of Chadar changes. The Chadar beneath the snow starts melting and it became quite risky for all of us to go to Naerak. Our guide told us about the problems we could face and how we could be stuck up there at Naerak without food and supplies. So the whole team came to a consensus of not going further. This was disappointing but at the same time we thought, the whole experience was amazing (Even the opportunity to reach till Tibb)

This was the day we started our journey back. We got so much used to walking on Chadar that in the last few days, we could even manage to run on Chadar. Slipping and falling with both the legs going up was a common sight for all of us. But the way locals walk on Chadar looked very effortless. They carry goods (mostly camping stuff and food) on the sleds made by themselves that can hold up to 100 kilos of the stuff. On chadar, they just pull the sled, but at the places where we encounter watery and rocky patches, they carry them on their shoulders like backpacks. Most of the locals depend on tourism for their living. During winter, most of them will be free with almost no business or jobs and hence chadar trekkers provide them with enough work for winter. It was interesting to learn about our trek guide who works as a cab driver in Leh and during winter he works with trekking communities to guide them on chadar.

Coming back to my journey itself, it was beautiful for me. I always look forward to such spiritual journeys that allow me to connect myself with nature and learn from it in retrospect. It also makes me push beyond my limits both physically and mentally to overcome challenges and take risks. I always make new friends and this trip allowed me to connect with many interesting people who share similar interests. During this journey, I could spend a lot of time with myself, walking, realizing, and feeling very small in front of the huge gorges and valleys. I felt inspired that I was in the territory of big cats for a few days. I felt awesome walking on the frozen river. I felt great having experienced subzero conditions. I felt cool about everything and was happier throughout the time I was there in those frozen valleys of “Zanskar”.

Also during this trip, we did some good Republic day celebrations where we performed a small parade. One of us had got the Indian National Flag (We were lucky), we did the flag-waving ceremony as well. It was on the final day when we were returning for Leh. I got a chance to spend a good 5 hrs in one of the army camps where we were waiting for our cars to come and take us back to Leh. We were sitting in a tent which had a Bukhaari to make us feel warm, it was ten when I realized the struggle that the Indian soldiers have to have guarding us in the Himalayas (Dras, Kargil, Leh, etc). The hardships that they have to face due to the extreme temperature conditions in that region. One incident that gave me goosebumps was when I saw a soldier making a call to his family and letting them know about how he was and then telling them that he will be able to call for another 15 days and not less than that. The feeling for respect came from within.

Lastly, this birthday was phenomenal as I got a chance to celebrate in Leh. It was the craziest ever birthday as I had new friends, new places, winters, and low connectivity. We danced in cafes and had a good drink and dinner session.

Sushant is a data scientist, boasting an expansive portfolio. He is a photographer, traveller, motorcycle enthusiast and adventurer. He believes himself being a jack of all trades but a master of none. His Life Motto - Nosce Te Ipsum.