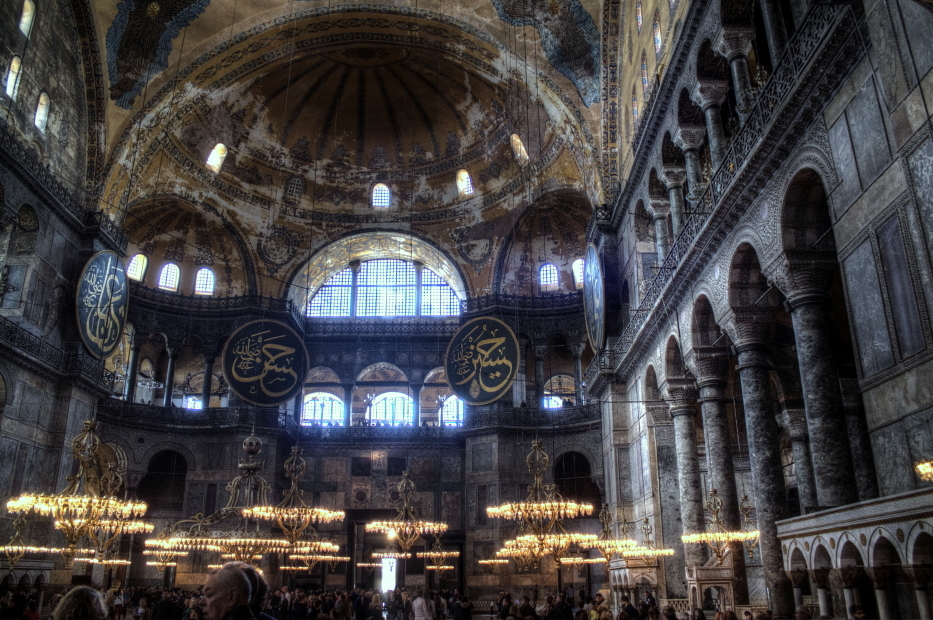 Hagia Sophia: turning this Turkish treasure into a mosque is at odds with its Unesco status

The Hagia Sophia has just opened to receive Sunni Muslim worshippers for the first time since 1931. The decision to convert the building in Istanbul, Turkey from a museum back into a mosque has divided opinion. Many Turkish inhabitants commend the transformation while mostly secular Turkish inhabitants and much of the international community find it inconceivable. Strategically located for more than two millennia on the Bosporus between Europe and Asia, between the Black Sea and the Mediterranean, Istanbul has been the site of major religious, political and artistic events in world history.

The Hagia Sophia, originally a Byzantine church built in the sixth century, and for a short period in the 13th century a Catholic church, was converted into a mosque in 1453. It became a symbol of the Ottoman conquest of Istanbul by Mehmed II, also known as the conqueror. The building owes its splendour to the Ottoman architect of Armenian origin, Mimar Sinan. Between 1566 and 1574, Mimar Sinan extensively strengthened the Byzantine structure by adding two more minarets, securing its status as a monument that amalgamates symbols of both Christianity and Sunni Islam. This made the building something quite unique in the world.

The beginning of the end for the Hagia Sophia’s previous period as a mosque came in 1928 when the Amendment of the Turkish constitution defined the relationship between the state and religion. This was followed by the reforms of Turkey’s first president, Mustafa Kemal Atatürk, which set up a political grounding of the modern, democratic and secular state. As a result, the Hagia Sophia was closed to worship in 1931. After extensive renovation, in 1934 it was converted into a museum – an act which symbolised Turkey’s secularism. However, religious sentiments from both Christian Orthodox and Sunni Islam started to become more prominent at the beginning of the 21st century, with both demanding that the building should be returned to their religious worhsip. In 2006, a small room in the complex was used for prayer for Christian and Muslim employees on the site. In 2007 a Greek-American politician, Christos Spirou, launched an international campaign to restore the Hagia Sophia to a Christian church. Political campaigns both internal and external to Turkey have focused upon who rightfully owns the Hagia Sophia.

On July 10 2020, Turkey’s administrative court, the council of state, ruled to annul the 1934 decree. Later that day, Turkish president Recep Tayyip Erdoğan signed a presidential decree turning the Hagia Sophia back into a mosque and opening it as a place of prayer and worship.

Who does it belong to?

Converting the Hagia Sophia back into a mosque has very challenging consequences within Turkey but also on a transnational level. The Hagia Sophia is a Unesco World Heritage Site, inscribed as a part of the historic areas of Istanbul in 1985. Being a world heritage site ratifies a site as highly prestigious and culturally precious to the territory in which it is located. However, an important question is: to whom does such a site belong? Is it to the nation where it is situated or does its beauty, value and significance go beyond national ownership? If named as a world heritage site, it arguably belongs to the whole world. This is a very debatable issue, and may seem controversial, but for those who believe this, the question which comes to the fore is whether the Turkish government has the right to convert the Hagia Sophia and mess with its intangible heritage context such as its legacy of being a museum.

Many world heritage sites are used in national politics, national branding and promotion. But when this involves linking or indexing these sites to aspects of national and international ideology and identity, one always needs to “other” someone else. There exists an exclusionary aspect to this promotional activity. The Taj Mahal, for instance, is often linked with divisions about ownership in the population of India. Is it a Mughal-Islamic monument, or a Hindu monument? It might be argued that in essence, the Taj Mahal supersedes these religious and national extremes. It is a world heritage site with global currency and status.

In a similar vein, the Hagia Sophia is being used by the Turkish government in the context of the de-secularisation of the country. Reprising its role as a mosque, it has become a symbol of the modern Turkish nation where Turkish flags and the symbols of Sunni Islam are seen hand in hand. This brings the religion and state together.

Turkey is a state where Sunni Islam dominates, while other denominations, such as Alevism (around 15% to 25% of the population), are silenced and “othered” by this turn towards de-secularisation. With the conversion of Hagia Sophia into a mosque, secular Turkish citizens are “othered” as well. The conversion is therefore very challenging in a multi-religious and multi-ideological society.

It also brings back east-west binaries over the building, where the Christian and secular world is seen as mostly in dismay about the decision and the religious Muslim world is in total acceptance. In sum, this decision has unnecessarily created division.

Focusing at the national level, secular inhabitants of Istanbul and Turkey fear that the Hagia Sophia will never again be a museum. Given that there seems to be a clear push towards religion in politics in the country, it may be very difficult to achieve. Even if the opposing political forces win in the future, they may never dare to change it back to a museum because religious stability is very fragile and extremely vulnerable in Turkey.

This article is republished from The Conversation by Senija Causevic, Senior Lecturer in marketing, SOAS, University of London under a Creative Commons license. Read the original article.

Senija works as a Senior Lecturer in marketing, SOAS, University of London. She is a cross-disciplinary scholar, specialising in cultural theory, critical marketing and the creative industries. Her research interests include discourses of management, the commodification and appropriation of cultural heritage, and the role of cultural heritage and the creative industries in the normalisation of social relationships in times of post-conflict and post-crisis. She is a Co-Chair of the Centre for Ottoman Studies and member of the Centre for Gender Studies at SOAS.