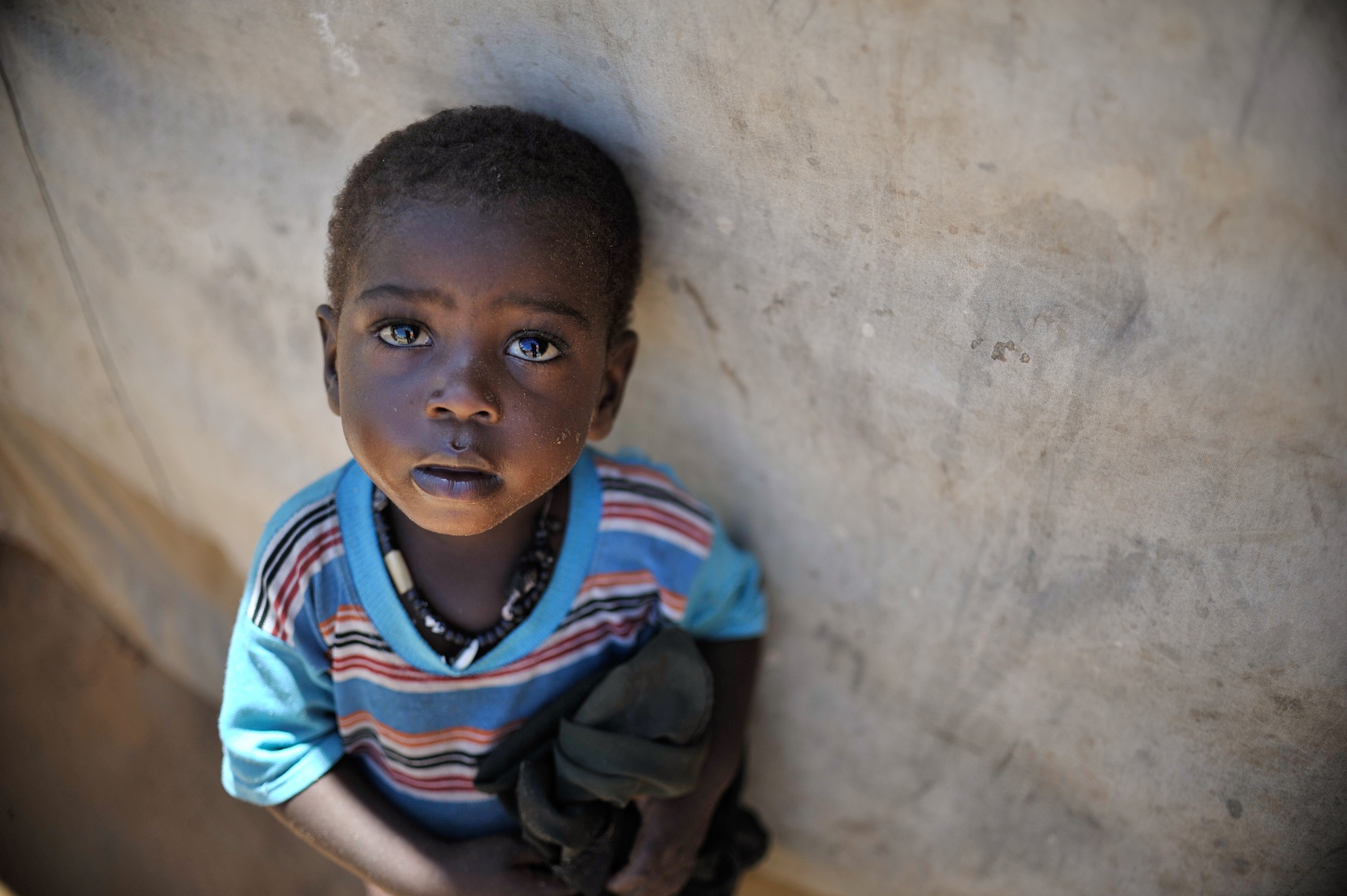 The 50 Year Old Struggle For Independence In The Western Sahara

Since November 2020, a military conflict in the Western Sahara has been boiling up again. The region has been occupied by Morocco since 1975, denying the Sahrawi independence movement the establishment of its own state. The area on the northwest coast of Africa does not – unlike in European conceptions – consist merely of sand: It is one of the most resource-rich areas in the world with large reserves of gold and phosphor. Kontrast met with two young independence activists, to whom this region means the world. We discussed with them the history of the embattled area, the role of Europe and the current situation.

Darak Abdelfatah Ubbi has spent her entire life in a refugee camp in Algeria – her grandmother lives in the Moroccan-occupied territory of Western Sahara – she has never been able to visit her. She travels with Hamdi Aomar Taubali through 22 different European countries to draw attention towards the situation in her homeland. They call themselves brother and sister. Both are activists Frente Polisario (spanish abbreviation of «Frente Popular de Liberación de Saguía el-Hamra y Río de Oro», or ‘Popular Front for the Liberation of Saguia el-Hamra and Río de Oro’). The two regions mentioned form the Western Sahara. On their journey, Kontrast was also able to speak to the two activists.

The History of war in Western Sahara

Hamdi talks about the conflict between the Frente Polisario and the Moroccan government that has flared up again since November 2020. In order to understand the argument, we must look to the past. Darak patiently explains her country’s history, probably for the hundredth time since hardly any Europeans know of it. “It is important to understand that the Western Sahara had been a Spanish Colony until 1975.” At that time Spain was not yet a democratic state, but a fascist dictatorship led by Francisco Franco. Due to international pressure Spain promised in 1967 to hold a referendum on the status of Western Sahara but delayed it several times. A ploy that the Sahrawis will experience again later in history.

In 1973 the Frente Polisario was formed and started an uprising to achieve the end of colonial rule and gain independence for Western Sahara. Two years later the Spanish left Western Sahara and the Sahrawis’ goal was within reach. But things did not go to plan.

Morocco had been eyeing the resource-rich area for some time. Political groups calling for the creation of a ‘Greater Morocco’ encompassing all of Western Sahara, Mauritania and parts of Mali and Algeria became increasingly powerful. To enforce the claims, King Hassan II. called on his people to partake in the so-called ‘Green March’ even before the Spanish withdrew. This meant 350,000 mostly unarmed Moroccans supported by the military crossing the border to the ‘Spanish Sahara’. This put Spain under pressure and led to negotiations between Morocco, Mauritania and Spain concerning the territory of Western Sahara. Representatives of the people of Western Sahara could not partake. Nevertheless, a solution was presented: Morocco occupied about two thirds of the area; Mauritania received one third in the south.

15 years of war for the Democratic Arab Republic of Sahara

The Frente Polisario reacted by proclaiming the ‘Democratic Arab Republic of Sahara’ in 1976. This was followed by a war that lasted until 1991 and displaced hundreds of thousands. Morocco waged war with particular harshness, including the use of napalm. Mauritania left Western Sahara in 1979 but Morocco annexed this territory as well. However, the Frente Polisario managed to bring about 30 percent of the country under its control. The Moroccan government separated this zone from its own area through a 2,700 km boundary wall. In 1991, a truce was agreed, and Morocco promised to hold a referendum on the independence of Western Sahara. This did not come about for 30 years.

This situation became the norm for the people of Western Sahara. In total, there are between 500,000 and one million Sahrawis – an exact count is difficult due to them living distributed among five refugee camps in Algeria (around 176,000), in the diaspora (mainly Spain and Cuba), the territory administered by the Frente Polisario and the area controlled by Morocco (up to 500,000). The five large refugee camps in Algeria developed into refugee towns administered by the inhabitants themselves.

“WE NAMED THEM AFTER THE FIVE MAJOR CITIES OF OUR COUNTRY SO THAT RESIDENTS DON’T FORGET WHAT THEIR REAL HOME IS.”, HAMID EXPLAINS.

Children were born in these camps, went to school and are now thirty years old without ever seeing their grandparents in the Moroccan-occupied territories. One of them is our interview partner, Darak. She tells us about the moment when she realized not all people in this world live in refugee camps:

“WHEN I WAS SIX YEARS OLD, I WAS ALLOWED TO PARTICIPATE IN A SPANISH EXCHANGE PROGRAM AND SPEND THE SUMMER WITH A SPANISH FAMILY. UNTIL THEN, I THOUGHT LIFE JUST LOOKED LIKE THIS: EVERYONE ALWAYS LIVES IN THE SAME PLACE, THERE ARE NO SWIMMING POOLS OR NICE HOUSES. WHEN I FLEW TO SPAIN IN 2000, I HAD NEVER SEEN A PLANE BEFORE, NEVER SEEN A BEACH. I REALIZED THEN, THAT I WAS LIVING IN A BIG LIE. THAT THE REFUGEE CAMPS ARE COMPLETELY SEPARATED FROM THE REST OF THE WORLD. IT WAS THEN THAT I UNDERSTOOD MY RESPONSIBILITY AS A SAHRAWI.”

The land is rich – but the population is poor

The 30 years of peace – or waiting for the referendum – were a profitable period for Morocco and European companies. Western Sahara is home to the largest phosphate deposits in the world – one of the most important resources for modern agriculture, as most fertilizers rely on it. The country’s sea is one of the world’s three most prolific fishing areas. Rich deposits of diamonds, gold and uranium have also been found, as well as copper, nickel, zinc, lead and cobalt. Oil and gas reserves are also said to be located near the Coast of Western Sahara but have not yet been explored due to the conflict.

One thing is certain: the land is incredibly rich in raw materials, but the population hardly benefits from it.

“WE COULD BE ONE OF THE WORLD’S RICHEST COUNTRIES. WE COULD COMPETE WITH QATAR. BUT OUR ABUNDANT NATURAL RESOURCES DO NOT BENEFIT THE POPULATION. EUROPEAN COMPANIES EXPLOIT THE RESOURCES AND SIGN CONTRACTS WITH MOROCCO IN ORDER TO DO SO. WE SAHRAWIS GAIN NOTHING FROM IT.”, HAMID POINTS OUT.”

If you follow the trail of raw materials, you can see quite clearly who profits from the status quo in Western Sahara. Siemens does business there with renewable energies, HeidelbergCement from Germany runs a cement factory in the Moroccan-occupied territory, Continental AG is involved in business with phosphate mines. Especially France, as Morocco’s former colonial power, profits according to Darak:

“THE UN AND THE EU CONSTANTLY REAFFIRM THAT THERE HAS TO BE A REFERENDUM ON THE INDEPENDENCE OF WESTERN SAHARA. FOR 30 YEARS, EVERYONE HAS BEEN PROMISING THAT TO US. BUT FRANCE IS BLOCKING THE REFERENDUM FROM WITHIN THE UN SECURITY COUNCIL. THEY HAVE NO INTEREST IN OUR INDEPENDENCE. THIS IS A DISGRACE TO THE EU. WHAT IS THE POINT OF WRITING HUMAN RIGHTS ON THE FLAG BUT IMMEDIATELY FORGETTING THEM AS SOON AS THERE ARE PROFIT INTERESTS?”

But the negotiations are also at odds because of varying ideas about the format of the referendum: The Frente Polisario only wants to give voting rights to those who have lived in Western Sahara before 1975, as well as their descendants. Morocco, on the other hand, wants to consult the population living in Western Sahara nowadays. This includes the 100,000 Moroccans who have settled there in the meantime. These 100,000 votes could decide the outcome of the referendum.

In November 2020, the situation eventually escalated. The Moroccan army entered the zone controlled by the Frente Polisario in an area near the town of Guerguerat in the extreme southwest of Western Sahara. The reason for this was supposedly the blockade of a road between Morocco and Mauritania by Polisario-sympathizers trying to draw attention to their concerns.

The incident shows how important Western Sahara is for Morocco; not only monetarily but also strategically. Ultimately, Morocco’s access to the rest of Africa is at stake: Algeria has closed its borders – thereby the only land route for the transport of Moroccan goods to the rest of Africa is through Western Sahara. Subsequently, the Polisario launched artillery attacks on Moroccan positions, according to their own accounts. Morocco denied having been attacked, even though the attacks were confirmed by the United Nations. This stands as an example of the kingdom’s determination to hide the conflict from the world’s view.